This was a nice long weekend for me – spent some time with the family and offline for a change.  Of course, it rained for a good bit of the time which typically means one thing for us: Movie time!  This weekend, outside of going to Busch Gardens (and continuing to live the Griffon Curse – every time I go to ride the thing, it’s broken) – we watched five movies that were new to me, at least, and I thought I would share my thoughts on each of them. 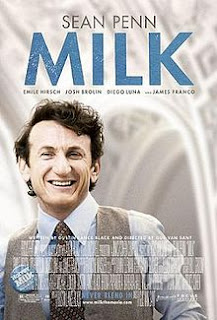 1. Friday night – “Milk” – This movie was the biopic of Harvey Milk, the first openly gay person elected to a major public office.  Sean Penn gave a powerful performance as the title character, and the film also starred Josh Brolin and James Franco.  I enjoyed the power of this movie and its message of tolerance (as many movies of this type engender), although as with many biographical films, it had its slow moments.  We watched this with our 13-year-old daughter who had perhaps the most poignant observation of all.  “If I had been raised with people who hate like the people in this movie, would I hate too?” she asked rhetorically at one point.  Would she indeed?  I’m glad she asked that question rather than feeling the other way.  I would give this movie an 8 (out of 10). 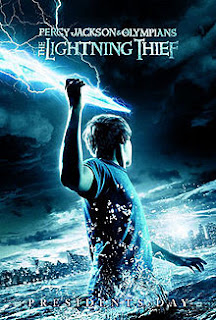 2.   Saturday afternoon – “Percy Jackson: The Lightning Thief” – Yes, I know, where was I when this first came out?  In all honesty, we planned to see the second movie this weekend with the kids and I wanted to see the original first, especially since I have not read the books.  (My oldest daughter has read them all.)  It seemed to have all the elements that would make a good movie – the wonder of someone discovering they are more than what they think they are; a world hidden underneath our own; Greek mythology which is usually fun to play with; and a cast that included Pierce Brosnan (the centaur Chiron), Kevin McKidd (Poseidon), Sean Bean (Zeus), and Uma Thurman (Medusa).  So, why didn’t this movie work all the way for me?  It seemed too thin.  There just wasn’t a lot of depth to the story for me.  And it also felt like it was trying too hard to be the next Harry Potter. Now, in honesty, my daughter said that the movie took a lot of detours from the book, so maybe that’s where it went wrong.  It was exciting of course, but I just wanted there to be more within the story.  I would give it a 6. 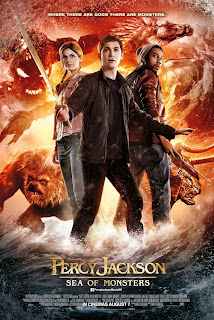 3.  Saturday afternoon – “Percy Jackson: Sea of Monsters” – So we had just seen the first movie, and off to the theater we went to see the second.  I was still positive, after all, the first one was at least good enough to make a sequel, and sometimes the second movie is the one that hits a home run (see Star Trek and X-Men, for example).  But once again, it disappointed, for the same reasons as the first.  To top it off, this one was missing the best parts of the first, which were the gods (in my opinion).  Pierce Brosnan’s character was recast, and the only gods that showed up were the admittedly always-brilliant Stanley Tucci as Dionysus and Nathan Fillion as Hermes.  Best line?  Tucci’s Dionysus when lamenting Zeus’ eternal curse that turned all of his wine into water as soon as he poured it: “You know Christians have a guy who can do this trick in reverse.  Now THERE’S a god for you.”  Unfortunately, that line was dropped in the first ten minutes.  Anyway, I’m just not sure I’m going to enjoy this franchise, and I REALLY want to.  Movie #2 gets a 5. 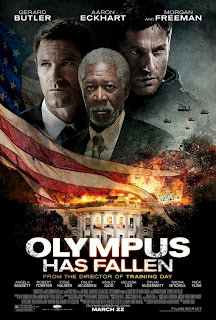 4.  Saturday night – Once the kids went to bed, we rented “Olympus Has Fallen”, one of the two White House terrorist attack movies released this year.  It features Gerard Butler doing something he does very well – kicking the bad guy’s ass.  This movie ran the “Die Hard” playbook almost page by page, even down to the banter between the head bad guy and the lone good guy over the radio, and you know what?  “Die Hard” was a pretty fun movie, and so was this.  No, there wasn’t much in the plot that wasn’t completely contrived, but who cares?  Aaron Eckhart gave a good performance as the widowed President, and Morgan Freeman does his usual masterful job as the Speaker of the House thrust into the number one position when the White House goes down.  This one I would recommend for an easy night when you don’t want to think very much (so it fit our Saturday perfectly).  Give this one a 7. 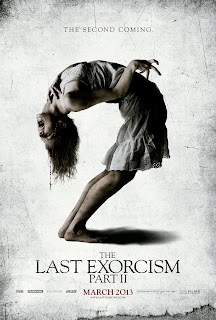 5.  Sunday afternoon – “The Last Exorcism Part II” – I was looking forward to this, as one of the only people in the family who enjoys scary movies (although middle daughter has started to get into them).  The first installment I thought was very good.  As it turned out, we brought it over to a friend’s house to watch with two other couples.  Unfortunately, the filmmakers could not recapture what they had with the first movie.  It sort of reminded me of the two “Blair Witch Project” movies.  In both cases, the first movie was done in a documentary, hand-held camera style, where you really felt like the characters who were experiencing what was going on and seeing it through their eyes.  And in both cases, the second movies were absolutely nothing like that.  My wife said it best – “It just felt like nothing happened in that movie.”  Agreed.  Maybe they were so focused on setting up a third, they forgot they needed to tell a story here with the second … instead it felt like a lull in the middle of a movie that lasted for two hours.  I can only give this a 3, and be hopeful the makers will right the ship if they decide to do another.

So that was part of my weekend off – outside of Tae Kwon Do and soccer practice.  What were you guys up to?
Posted by Aaron Speca at 6:41 PM