So a little break from talking about writing, to say a little something about something that happened between Christmas and New Year's.

If you've been reading, you know that I am part of a Role Playing group, and we've gotten fairly close over the last eighteen months.  I mean, I only know a couple of them from face-to-face meetings, but still we are like an extended family.  We talk and support each other all the time.

So you can imagine how we all felt when we heard from one of our member's family that he had been killed in a head-on collision with a tractor trailer two days after Christmas.  Shock wasn't even close to the right word.  We were all affected, and a couple of our members (one who was his best friend outside of the group, another who played his mate) were absolutely devastated by the news.  There was a lot of chatter going on, tons of virtual hand-holding and shoulder-crying.  It hurt tons.

So I was online putting together some things for them when lo and behold, he pops up and just starts talking on our page!  At first I thought someone had hacked his account or something or was playing a sick joke.  I mean let's be honest, we had heard from the family and the friend ... and crazier crap has happened online.  But after a couple of posts it was obvious it was him.

Seems that he and a friend of his had gone out drinking.  At one point, his friend had given him his wallet to hold.  Later in the night, his friend was sober and needed to drive and asked for his wallet back.

A tractor trailer crossed the center line as they were headed home in bad weather and hit them head-on killing the driver.  Turns out, his friend had inadvertently gotten the wrong wallet.  Our member was unconscious the whole time they were going through the notification process, and when he woke up, they were calling him by his friend's name.  He spent the next several hours proving that he was who he said he was.  He came out of it hurt, but overall okay.

Now it is a tragedy still that his friend was killed, so it's tough to know what feelings one is SUPPOSED to have when something like this happens.  But it was an incredible story and roller coaster.  I mean, you can't WRITE this stuff!

So what's my point?  Well while this was all going on, I had written a note for some of our members, a couple who had mentioned the possibility of quitting.  I wanted to express how I felt about that whole thing, and it turned into a little commentary on living life and how we all needed each other.  I felt like sharing it here.  Peace, hope you all had a great holiday season and will all be able to enjoy it again next year!

"Alone"
Why do we do this?
When something tragic happens to someone we know, no matter how closely or distantly, inevitably the questions come up.
For those that were close, they ask questions like "Why did this have to happen?"  "What do I do now?"  "How can I ever do this again?"
For those that might have known the person just on the periphery, they might ask "What if it were {fill in the blank}?"  "What would I do if it were someone close to me?"  "Why do I even take the risk?"
Genesis 1:3-4 -- "And God said, 'Let there be light,' and there was light.  God saw that the light was good."
This mantra is repeated over and over in the first two chapters of Genesis.  God created, and saw it was good.  Land, sea, sky, stars, plants, animals.  Every time God created something, He saw that it was good.  Until the sixth day, after God created the first man.
Genesis 2:18 -- "The Lord God said, 'It is NOT GOOD for the man to be alone.'" (my emphasis)
To me, this passage is not about how many days it took for God to create the world, or whether or not He even exists.  No matter what you believe, whether it's in God, or an intelligent design, or that it is just random bits that fell together ... I believe that we were not made to be alone.  That we would literally shrivel away to nothing if not for other people.
I was talking to someone today who thought she might seriously quit RP over this loss.  Now she admitted she probably wouldn't, but it got me to thinking, are there others that might feel this way?  That might feel that the risk is too great, that the pain of someone hurting you, or being different than you thought they were, or leaving, or God forbid even dying?
These thoughts have crossed my mind as well.  What if?  That is the biggest question.  What if it were Nick, or Jeshika, or Savitar, or Trish, or Kyra, or Siana, or Aimee, or Bride, or ...  What if it were someone I knew in real life?  My wife, my sister, my friends, my parents.
How easy would it be to shut them all out and avoid that pain?
For me it would be impossible.  Because, MY world would be a very boring place without them in it.  ALL of them.  And all of you.
Why do *I* do this?  Because to me, it is all worth the risk.
I could be alone, but alone I am nothing.  I can't write on my own.  I don't go out to be on my own.  I can't love on my own.  I can't live on my own.  Avoiding that is worth the risk of pain or loss that will inevitably happen every time I open myself to a new friendship, here or in my "real life".
"It is NOT GOOD for the man to be alone."
It is not good for any of us to be alone ... don't make that choice.  Take time if you need it, even leave RP if you feel you need to, but please don't make the choice to BE alone.  To EXIST alone.  It wasn't meant to be that way. 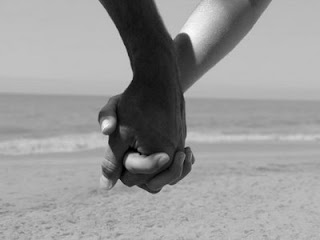