I've decided to work with my friends at Talk Supe (talksupe.blogspot.com) to join them in bringing you my own monthly Gush and Gripe!  I hope you enjoy them.  Of course, these opinions are mine alone and in no way are meant to reflect the opinions of Talk Supe or any of my writing partners or associated companies. 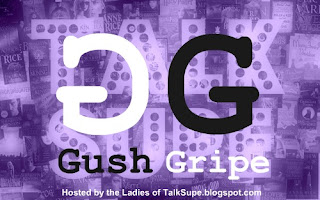