A couple of weeks ago, I posted a blog about “free” e-book sites and rebutted some arguments that users and operators of these sites have given to justify what, by all appearances, is a disregard for copyright laws.  In that post, I tried to briefly break down eight particular statements that I had seen made during online discussions between authors and users of the sites.  You can find that blog post here …

Now, there was quite a bit of support for the post, but it did draw one person in particular who took issue with the act of e-book piracy doing any harm to writers.  In fact, he argued, there’s evidence that e-book piracy actually HELPS authors by getting their works out to a wider audience.  He pointed me to a blog post he had done in February.  In order to be fair, I wanted to take a look at his argument – throwing out the question of whether it is legal or not, is there evidence that piracy actually helps artists?  Here’s the comment he left …

“That was a very reasonable and sensibly written article. The FB discussion that spawned this wasn't. I'm pro file sharing so I want to bring a dissenting opinion (please don't just shout me down, I've had enough of that from [the] other discussion). Piracy isn't theft in the traditional sense, that being removing something from some ones possession, but I agree that it could still be wrong. I would find it immoral if it were actually causing artists to go out of business, but from as [far] as I can tell there [is] no evidence that [has] happened. Here's a more lengthy piece I wrote on it: http://piratewho.org/2012/02/06/file-sharing-doesnt-hurt-artists-part-ii/ I know it's piratewho and therefor it's all evil and wrong, but try to read and analyze the evidence. Thanks”

Before I get into this, I want to say that I do appreciate his willingness to come into what is undoubtedly a hostile environment for him and express his views.  And even though it was probably clear from the outset that neither one of us would change the other’s opinion, it was a very cordial exchange of opinion.

Ok, so here is his blog so that you can look at what his argument is …

Now this post focuses on the music industry which, as I will get into in a little bit, I feel is significantly different than the publishing industry.  In this post, he describes a study that shows that since electronic piracy became a major issue (he puts it at around 1999), the music industry has actually increased revenues.  This study was a Norwegian one.

If you look at the graphs he presents, they show that record sales have indeed decreased fairly significantly since 1999.  In fact, they went down by more than a third over the time period from 1999 thru 2009. 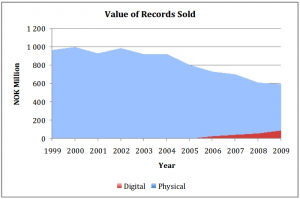 However, the study shows that overall, revenue in the music industry has gone up.  There were three particular areas that showed a large increase over the same time period – live revenue (concerts) more than tripled; revenue from collecting societies royatlies) doubled; and state subsidization and grants went up by about half, estimating visually. 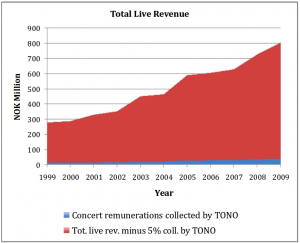 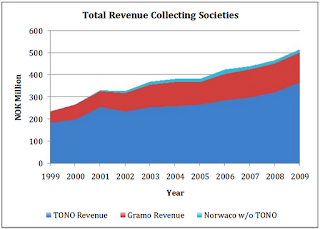 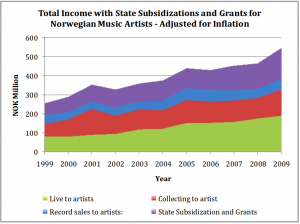 All of this translates to a steady overall increase in music revenue, despite the loss of record sales.  So, the conclusion reached seems to be that piracy has actually HELPED the music industry.  Thus, he argued, it should also help the e-book industry.

A COUPLE OF FLAWS IN THIS ARGUMENT

Correlation does not always equal causation.  Just because two things happen to occur at around the same time, does not mean one caused the other.  With the USA winning Olympic gold today (go USA!!!!), the announcers made the statement that the US team has a record of 93 wins, 2 losses, and 5 ties when Abby Wambach scores a goal.  Does that mean her scoring caused them to win?  I would argue no, because during that same time period they lost a grand total of 7 games the entire time, whether she scored or not.  They won all those games because they are a great team overall, not because one player scored or didn’t  score.

So, does this prove internet piracy CAUSES or even HELPS this increase in revenue?  I would argue no.  Not unless you can eliminate every other market factor over that time period.  Markets are incredibly complex.  Fluctuations in economy, marketing, the quality of the product, the mood of the consumer, pricing, all of these things can impact the revenue stream.  Piracy is just one of those factors.  Just because the overall industry does better does not mean piracy doesn't hurt it. 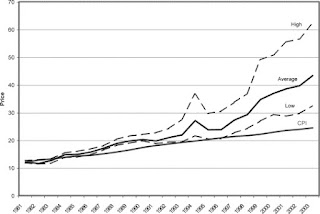 One question I asked him was, did anyone look at the increase in concert ticket prices over that time period?  I was especially interested because of the huge increase in concert revenue.  Couldn’t the record companies be jacking up ticket prices (and concession and souvenir prices too) to make up for the loss of record sales?  I took a look around the internet, and found this chart which admittedly only goes up to 2003.

It shows that up until 1999, which was used as the “pivot point” when piracy became a well-known issue, the concert prices stayed fairly close to the inflation line.  But from 1999-2003, the average price increased by approximately 50%, well ahead of the rate of inflation.  I can tell you I rarely go to concerts anymore, because they have become cost-prohibitive.

So internet piracy must have caused the increase in ticket prices right?  I wouldn’t necessarily say that either.  I can only say this … every time a song was pirated, that person did not pay for that song.  Correlation to the drop in record sales?  Did the industry start increasing concert prices to make up for it?

The music industry is very different than the publishing industry. Yes, they are both arts.  But with the music industry, there are other opportunities to make money other than record sales.  Live concerts and royalties, as mentioned above, make up a large portion of the industry’s revenue stream.  The movie industry is another oft-mentioned industry with respect to piracy, but it also has other revenue streams.  First of all, good movies make their money initially at the theaters before they even get in a position to be pirated.  (By the way, have you noticed how much movie ticket prices are these days?  Check out the chart here, it’s close to  flat from 1989 to 1998, then the slope becomes steeper from 1999 thru 2011, nearly doubling.)  Then they get on the DVD market, then get syndicated on television.  I could argue that DVD sales may be on a similar curve to record sales, although I don’t have that data. 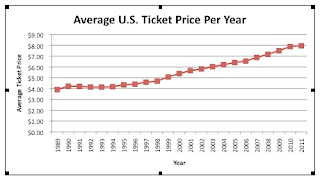 The publishing industry has no such alternate revenue source.  Authors don’t go on live tours to read their books aloud.  There’s no opportunity to make money before the book is released.  No, the only way an author gets paid, is if the book sells.  The only equivalent chart in the music industry is the one that shows the sharp decline in record sales.  If books are seeing anything like this, of course the argument can be made that piracy is hurting books sales, because every book illegally downloaded is one person that will not be buying that book.

I tried to find a chart that showed book revenue over time, but haven’t yet.  There are plenty of articles that talk about a decline in print book sales and an increase in e-book sales.  But there are some that say the e-books are not making up for the loss of print book revenue.  Is this an indication that piracy is doing what is claimed, or is it more a result of the proliferation of independent self-published e-books, free and 99-cent promotions (which are the author’s choice), and improving technology?

“The world keeps changing and if you want to demand money from someone you’ve got to offer them something they want. Asking the government to force us to buy your stuff is infringing on our human rights and slowing down progress.” I take real issue with this closing to the blog post.  First, obviously people want the books.  Second, what government forces people to buy books?  If you want them, buy them.  If you can’t afford them, there are libraries, lending systems through Amazon and B&N, used book stores, or you can save up to buy the books you want.  If you really think the prices are too high, then don’t buy them at that price.  If enough people did that, the prices would come down, that’s simple economics.  Third, I see this argument of rights.  What human right are authors infringing on by wanting just compensation for the products they produce?  Where do the author's rights come into play?

I guess the real problem with his argument, and mine as well, is that you can make these kinds of graphs prove whatever you want them to, it’s all in how you interpret them.  He says the music industry has increased revenue because of piracy, I would say that it has despite it.  He thinks it would be the same for books, I believe that is clearly not the case.

And here’s the crux of the issue: Regardless of whether one believes it helps or hurts, the bottom line is it is still illegal.  You might say, how is it different than the free books on Amazon?  The difference is, making the book free on Amazon is the author’s choice.  Pirate sites have taken that choice away from the people who own the work.  That’s copyright infringement.

I hope the industry changes to a model that benefits both the consumers and the producers and takes advantage of the technological opportunities that are out there.  But until that day, I will continue to hold my stance against these pirate sites.  As I always do, I encourage you to do your own research and make your own decisions about the issue.

I still have more to say about one site in particular, but I will save that for the next blog on the subject.
Posted by Aaron Speca at 5:31 PM