As progress trudges forward on our current work in progress, I decided to participate in "The Next Big Thing."  The way it works is, authors are answering ten questions about the story they are currently working on, then ends the posts with links to other authors' blog(s).  Then the next week, the next blogger in the chain posts about theirs.  So it gives you a chance to hear what is being worked on and discover new authors in the progress!  We hope you enjoy your stop here on the tour!

The Infinity Chronicles: Heart of the Mermaid by Aaron Speca and Patricia Laffoon

Patricia and I started writing together through a role play group.  One of our group members created a “pirates” group and we took our characters there and started their story all over again in the Golden Age of Pirates.  It took off from there, into two published short stories.  Now we are working on expanding their story into a novel and potentially a series.

It’s certainly an adventure/romance.  There are many other elements that we’ve brought into it, including a little paranormal and fantasy, and a couple of very surprising twists at the end that open up all kinds of possibilities for future stories.

4.      Which actors would you choose to play your characters in a movie rendition?

Well, the “models” we’ve always used for our characters are Adam Baldwin and Yvonne Strahovski (“Chuck”), so it would be tough for me to see anyone else playing them.  Of course, we also love Philip and Serena from “Pirates of the Caribbean: On Stranger Tides”.

A former pirate and an immortal mermaid fall in love but must overcome not only their own differences, but also the competing interests of their people and their people’s enemies, without realizing they are both part of a much bigger story.

6.      Will your book be self-published or represented by an agency?

Our first two shorts were published by XOXO Publishing, so I anticipate working with them again on this as well.

7.      How long did it take you to write the first draft of your manuscript?

Oh wow … still not quite finished (but we are close), it’s been over a year in the making.  I am challenged with a full-time job and three school-age children.  We have just started editing the draft while we are completing it.

8.      What other books would you compare this story to within your genre?

I’m not sure I can.  There are bits and pieces here and there that were undoubtedly influenced by many different sources.  Swashbuckling romance is just plain fun to write.  But this becomes, became, more than that, and I hope it will appeal to various readers.

Patricia’s character of Trish is the main inspiration for me.  We developed these characters separately before we even met, but after a time, they sort of demanded to be together.  So we listened, and then when we had them enter a new world (the “pirates” world instead of the present day), it was a perfect fit especially for Trish since she was a mermaid already.  Rediscovering their relationship again in this new setting (for us) was … is …  a grand adventure.

10.  What else about your book might pique the reader’s interest?

It turns out there is more at stake in this story than just Rudy and Trish’s love.  Much more.

Please check out our friends next week!

If you want to start working your way backwards to see who you missed, I was tagged by L. B. Clark, her blog post is here and contains links to where she was tagged from ...

My daughter just started her freshman year at Princess Anne High School.  She’d never really been into watching sports, so imagine my surprise yesterday when I got this text from her in the middle of the day (yes, schools have started to allow cell phone use at school, between classes only):

There’s a football game tonight, I was wondering if I could go after TKD.

(TKD is our shorthand for Tae Kwon Do, she’s a black belt.)

I was a little surprised, and even more so when I asked her this:

You mind if I go too?  I like football LOL …

I do not mind.

Well, cool, at least she’s not a completely jaded teenager who wanted nothing to do with her dad yet!  So after her Tae Kwon Do class, off we went to the stadium.  We had a short conversation in the car.

“So what’s the Princess Anne mascot anyway?”  I asked.

“The Cavaliers,” she said, smiling.

I looked sideways at her.  “You’re kidding, right?”   The Cavaliers were also the mascot of my college’s biggest rival when I went to Virginia Tech.  “I’m not sure I can say ‘Go Cavaliers,’ ever.”

She gave me a nasty look.  “Okay, maybe I can say ‘Go Princess Anne’.”  She just shook her head and looked away.

We arrived at the game a little late.  Princess Anne was leading 6-0 in the 2nd quarter.  She had mentioned to me, “We might even have a chance to win this game,” but I didn’t think anything of it.  After all, it’s high school, and sure there are different levels of teams, but you always had a chance to win.

As we were walking to the bleachers, Princess Anne scored but the touchdown got called back on a penalty.  I heard someone remark, “That’s twice now!”

We walked past the packed student section of the bleachers, but at the moment, Gabby didn’t want to sit with the students.  She alternates between shy and bubbly, so I wasn’t too surprised.  Just as we found our seats, PA did score on a long pass, and got the two-point conversion to go up 14-0, and before we knew it, it was halftime. 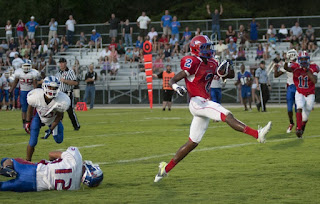 It was a great atmosphere.  You had the cheerleaders going crazy, you had the couple of parents who were sure they could be coach and were very vocal about it, typical venom directed at the referees, and the excitement that only comes from people who had a real stake in the game.  This was about school pride after all!

For me, and I know I’m dating myself here, it was the first high school football game I had been to in 24 years. The stomping, the clapping, the seemingly tiny marching band, the intimate nearness of the sideline when compared with the college game … it brought back tons of memories.  But there was something special going on, and I didn’t even know it at the time.

As the game went through a scoreless third quarter (which include a THIRD touchdown by PA called back because of a penalty), the excitement was ramping up.  People were getting louder, the completely packed student section was jumping, and Gabby, at the end of the quarter, finally ditched her dad to go hand out with her classmates.

That was fine, because I got to go online and check out the local high school football web page.  And that’s when I read the game preview.  And I suddenly got it.

42 games.  Let’s put that in perspective for a moment.  What does a 42-game losing streak feel like in high school football?

The last time PA won a football game, Rihanna had just had her first #1 hit, the #1 movie was American Gangster, and the TV show Heroes was still on the air.

This was HUGE!!!  At least in the high school world …

With five minutes left in the game, PA scored again on a long touchdown run to go up 21-0, and the celebration was already starting.  None of the players were sitting on the bench.  The students had moved down to the sidelines, were gathering just outside the end zone. 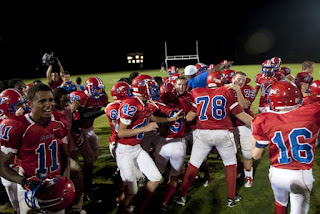 I texted my wife … This is great!  They are totally going to rush the field!

The public address announcer said repeatedly “Please wait until the players have shaken hands after the final whistle before going on the field.”  Obviously, they knew there was no stopping them.

With a minute left, the players did the time-honored water bucket dump over the coach’s head … a gesture usually reserved for big championship victories.  Not for the third game of the regular season.  But it really didn’t matter.

As the final seconds ticked off, the students couldn’t wait any longer.  They poured onto the field, followed by the marching band, the flag corps, and the cheerleaders.  It was electric, and I couldn’t help but smile. 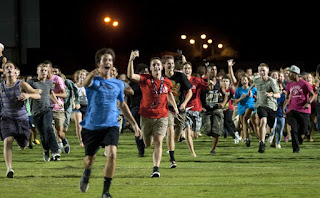 Then I saw my daughter coming back from the mass of kids at the center of the field.  “I can’t believe we won!!!!” she exclaimed. She had a huge grin on her face.  And I knew … this would be the first big high school memory that she was a part of.

How cool was that?

“You know, this means you have to come to every game now.  You’re their good luck charm.”

She grinned.  “Nope, this means we are the good luck freshman class!”

Now how could one argue with that logic?