Chance and Opportunity: How Collaboration Happens

Leading up to the August 20 release of Progeny of Sin: Dark Dreams, Dawn and I reminisce about how our collaboration got started ...

For me, Dark Dreams started a little over four years ago.  It’s hard to believe it’s been that long! But the story started a while before that.

Dawn and I first “met” as part of an online roleplay writing group.  Such are the wonders of the virtual world.  Although we rarely had occasion to write together directly, I was always impressed with the humor and sensuality Dawn wrote into her character.

Early in 2011, Dawn approached me with a manuscript she had been working on, the first in a series she had called “Children of Sheol”.  She needed an editor, and thought to come to me for assistance.  Now, I’d never edited anything, although I did have a deal to get a short story published with another writing partner.  So after literally warning her of my lack of experience, I got to work.

I immediately enjoyed the read!  It was obvious this was a labor of love for her, and I committed myself to doing the best job I possibly could to help her make her dream of becoming published a reality.

We talked, exchanged edits and ideas, and then amazingly, I was asked to come onboard the project as a co-author.   The first submittal we made was into the Harlequin “So You Think You Can Write” competition, where we submitted the first chapter and it was voted on by readers. Although we didn’t quite make it into the final round (we were close), Harlequin still wanted to see the full manuscript.  They eventually passed on it, but the experience was invaluable.

Then we discovered that HarperCollins was starting a new imprint called HarperImpulse, a digital-first imprint that was looking for new submissions and seemed like a good fit for Dark Dreams. We bit the bullet and went for it, and our lovely editor Charlotte Ledger decided to give us a chance!  She suggested a change to the series name which we took to heart, and Children of Sheol became Progeny of Sin.

Make no mistake about it, Progeny of Sin is Dawn’s story.  I will be forever honored that she came to me to help her bring it to life.  It’s not like she had a shortage of great writers to choose from.  I consider myself very lucky to be a part of it.  It has been an amazing ride that hopefully has only just begun!

I began the process of writing Dark Dreams as a solo writer.  I was going through a time in my life when I was seeking an escape.  After reading 38 novels in eight months, I closed the last book and decided it was time for me to set out on my own adventure.

Two of the heavy influences for Dark Dreams were Dante Alighieri’s Inferno and Paradise Lost by John Milton.  As a lover of everything dark, creepy, sexy and intriguing my mind began to do two things.  Fall in love with the power and intelligence of Milton’s Satan and all his demonic underlings; and wonder what it would be like to follow a “good” version of this character through Alighieri’s layers of Hell.

Let me stop here and explain that my comprehension and patience for endless poetry written in a way I can barely understand only went so far.  I suppose in some ways this is a good thing, my remedial grasp of the literature allowed me the creative freedom to take the basic concepts and twist them into that sweet spot where love and romance intertwine with the darkness in my head.

So, how does any of this relate to being a partner in a writing duo?  Well, I wrote my vision, I created what I think is the perfect man, tall, dark, demonic, slightly controlling and sexy as Hell but deep down you know that this being would rescue a kitten from a house fire.  When I finished my journey was 86,000 words…and a total catastrophe.

This is when I found Aaron.  Aaron’s role-play character was the boyfriend of my sister; hilarious I know, role-play can be so much fun.  I started reading everything Aaron wrote.  I was pulled into his character because of the detail with which he thought out his scenes and the organizational skills he had as a writer and a group leader.  I tried for a year to edit Dark Dreams.  It was not in me.  This piece needed another person, someone who had skills I did not possess.  It needed Aaron.

I asked Aaron to take a look at Dark Dreams as an editor at first, and quickly realized that he could add to it and give it a shape it just didn’t have.  I asked him to join me as a partner and he went through it once, twice, three times, I lost count.  He is now a piece of this work.  We go back and forth with ideas and usually agree about the direction the story should take.

HarperImpulse not only will soon release Dark Dreams but has also purchased its sequel tentatively titled, Dark Fate.  Aaron and I are excitedly working on this piece now.  It will include the same delicious daemons you will fall in love and lust with, during the first novel, and a whole new dark escape to fall into.  Until then… 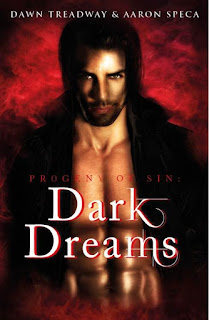 Progeny of Sin: Dark Dreams will be released on August 20 and is now available for pre-order!

All Nias wants is to live out his life without being involved with anyone else. No more emotion, no more connections, especially to pain in the ass humans. But when he sees Jade twisting a long curl of her wild red hair, and showing off the most amazing backside he’s ever been privy to; Nias just knew he was staring at a world of trouble. How could his family have enlisted him to obtain this girls help to traverse Sheol?

This dark paranormal romance takes you from Jade’s everyday existence into the world of the Djinn Sentry; an army of demonic solders determined to protect the human race; and then plummets you straight down into the seething malevolent Underworld where a multi-levelled caste system of Shaitan and the Devil himself welcome you.
Posted by Aaron Speca at 12:00 PM No comments: