Our journey began with short stories in these two anthologies from Allison Cassatta published by XoXo Publishing ... Evernight: Romance in a World of Darkness Volumes 1 and 2.  These short stories were pre-cursors to the first book of "The Realmwalker Prophecy".


Evernight Volume 1:   CURRENTLY OUT OF PRINT         with "Tears of the Mermaid" by Aaron Speca and Patricia Laffoon

Evernight Volume 2:   CURRENTLY OUT OF PRINT         with "Heart of the Mermaid" by Aaron Speca and Patricia Laffoon 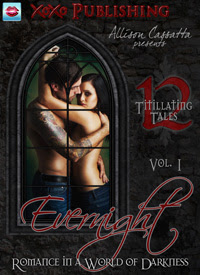 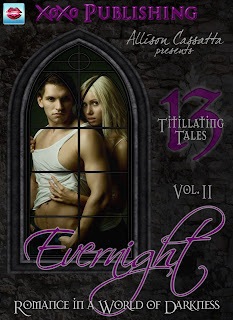 "Progeny of Sin" by Dawn Treadway and Aaron Speca

All Nias wants is to live out his life without being involved with anyone else. No more emotion, no more connections, especially to pain in the ass humans. But when he sees Jade twisting a long curl of her wild red hair, and showing off the most amazing backside he’s ever been privy to; Nias just knew he was staring at a world of trouble. How could his family have enlisted him to obtain this girl's help to traverse Sheol?

This dark paranormal romance takes you from Jade’s everyday existence into the world of the Djinn Sentry; an army of demonic solders determined to protect the human race; and then plummets you straight down into the seething malevolent Underworld where a multi-levelled caste system of Shaitan and the Devil himself welcome you.

"The Realmwalker Prophecy" by Aaron Speca and Patricia Laffoon

Book 1: Heart of the Mermaid (A work in progress)
Setting:  The sixth Realm of the Prophecy, 18th century Caribbean


Seaman Rudolph MacTavish, at one time, was a pirate.  Captured and indentured into service in the Royal Navy, he had put aside tales told by his late parents of monsters and mermaids, focusing on his duty and reaching an end to his tenure – until a mysterious stowaway affects him in a way he could not have anticipated, and he finds himself thrust into an unexpected adventure that could impact all of history.

Trish had a simple mission given to her by her father.  Sneak aboard the HMS Ursuline and steal an object that no person should be in possession of.  No human, at least.  When your father is the king of the Mer, you do what he says and don't question.  Her encounter with a sailor unlike any human she had ever met causes her to do just that, possibly betraying not only her father but her people as well.

Their journey takes them from the blue waters of the Caribbean to the ruins of a long-lost city, with the fate of more than one world in the balance.  For if the power that Trish's father seeks falls into the wrong hands, it could mean the end of their world ... and the next.