The Devil wants his due … The Daemon wants his out … and Jade just wants it all to be over. You don't always get what you want.

All Nias wants is to live out his life without being involved with anyone else. No more emotion, no more connections, especially to pain in the ass humans. But when he sees Jade twisting a long curl of her wild red hair, and showing off the most amazing backside he’s ever been privy to; Nias just knew he was staring at a world of trouble. How could his family have enlisted him to obtain this girl's help to traverse Sheol?

This dark paranormal romance takes you from Jade’s everyday existence into the world of the Djinn Sentry; an army of demonic solders determined to protect the human race; and then plummets you straight down into the seething malevolent Underworld where a multi-levelled caste system of Shaitan and the Devil himself welcome you.

Nias Hu’dor - High Caste Djinn Daemon and former Sovereign of the Djinn Sentry.  He is gorgeous, controlled and powerful.  He keeps the reason he is no longer Sovereign closely guarded.

Jade Shear - An ordinary human bookstore owner who also happens to be a fiery redheaded Empath. She considers her ability a curse.

Jibreel - With white shimmering hair and a translucent pale magnificence, she is the current reigning goddess in Arcadia. Joss refers to the goddesses as “Rulers of the Light”.

Eeia - Blond and spirited, the goddess Eeia has no love for the creatures of the underworld; whether Djinn or Shaitan she does not distinguish between the two.

Aquila - Auburn-haired goddess of Arcadia, she measures her words carefully and as such is considered the silent member of the trio.

Ren - A Defalpa Shaitan.  A short deformed non-human looking creature with a high whiny voice and long sharp claws.  Defalpas are low caste and can be used as Watchers.  Although low caste, a Watcher has underlings.

Phaeton Hu’dor - Current Sovereign and leader of the Djinn Sentry.  Phaeton is the second born in the Royal Djinn Hu’dor family.  He recently came into power when Nias voluntarily stepped aside.

Hamartia - A Ghoul, Head Mistress of pain in Sheol, although still considered an insignificant henchman by Iblis.  She is an upper level Daemon and leader to many underworld Shaitan including Protectors and Watchers. She has long black dreadlocked hair which falls around a scarred face.

Iblis - The Dark Angel, ruler of the hell realm of Sheol.  Over seven feet tall, horned, with black wings, and usually bare chested, he is also known as the “Dark Father” and considers all the daemons of Sheol his children, including the Djinn.

Joss Hu’dor - Youngest sibling of the Hu’dor family, he wants no part of leadership or of the Sentry. He mostly keeps to himself but not for the reasons his family thinks.  He senses a “darkness” growing inside him.

Empusa - A succubus daemon.  Succubae in Sheol need sex and blood to survive, and get it by taking advantage of weak male human souls, which they can then enslave until they are spent. Iblis forbids them from taking control of other daemons in this way, an offense punishable by death.

Ella Hu’dor - The lone sister of the Hu’dor family, she seems to resent her beauty.  A very accomplished Djinn warrior in her own right, she has become a leader in the Sentry.

Locke - A trusted Djinn and Nias’s best friend.  He is one of the few Djinn who often exhibits a sense of humor.

The Ifrit - Ifrit are part-bird, part-humanoid daemons that are used as transportation in Sheol by demons who cannot fly or transcend within the realm’s borders.  They stand over seven feet tall and are relatively stupid and compliant.

Rachel - Young human woman who was basically adopted by the Hu’dors.

The Palis - Large daemons who are nothing more than club wielding muscle for Iblis. 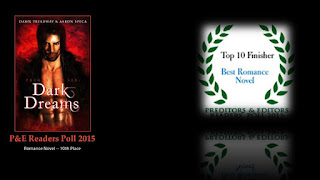